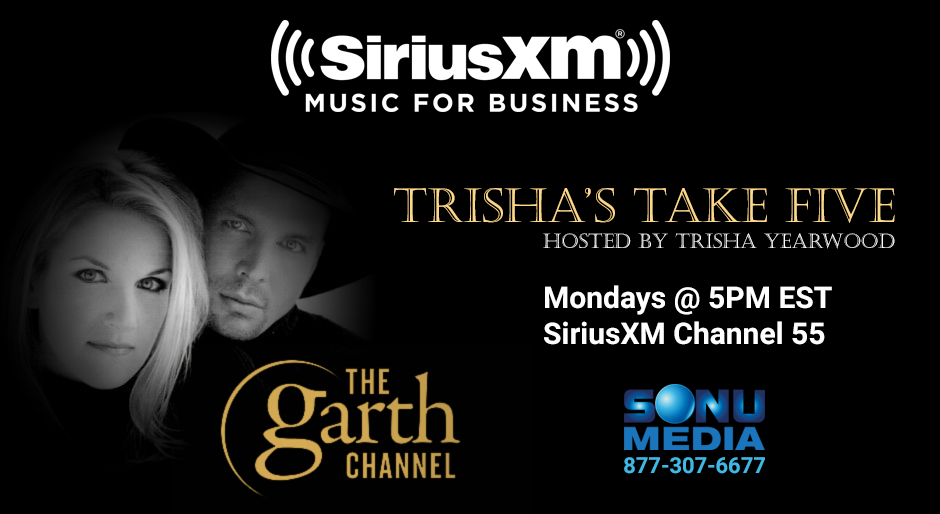 Trisha Yearwood fans have a brand new reason to tune-in to “The Garth Channel” (Ch 55) on their SiriusXM Music for Business accounts. The Grand Ole Opry member and prolific country music star is now hosting a weekly segment, entitled “Trisha’s Take Five”, on Garth Brooks’ signature station. “Take Five” consists of a hand-picked four song themed playlist curated by Trisha Yearwood, and the fifth track is chosen by you. Trisha is inviting her fans to interact with her new feature segment on SiriusXM by allowing you to choose her final song every week.

Yearwood is a welcomed guest on The Garth Channel, having built a strong relationship with Garth Brooks over 20 years in the country music industry and over 10 years of marriage. Brooks finds Trisha Yearwood to be an integral part of his success, stating “I have found everything I have done gets better when Trisha is added. Her addition to SiriusXM is no exception. The Garth Channel just got better.” “Trisha’s Take Five” adds yet another great broadcast special to the Country Music listening selection available on SiriusXM Music for Business.

“Trisha’s Take Five” will broadcast every Monday at 5 pm ET on The Garth Channel (Ch. 55), and rebroadcast on Wednesdays at 1 pm ET, Fridays at 9 am ET, Saturdays at 3 pm ET and Sundays at 8 pm ET. Keep it Country at your business with Trisha Yearwood and “The Garth Channel”.