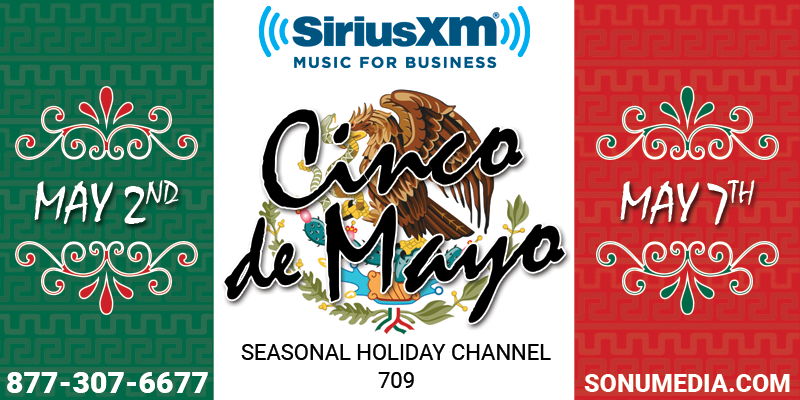 Cinco de Mayo is upon us, and we are ready to help you celebrate at SiriusXM Music for Business! The Seasonal Holiday Channel (709) will be broadcasting five days of the best celebratory Mexican music for the fifth of May. From May 2nd through May 7th, turn your business into a proper fiesta with the sounds of Norteño bands, up-beat Duranguense songs, and popular traditional Mexican music from artists including: Ana Gabriel, Larry Hernandez, Los Tigres del Norte, and many more.

Norteño is a genre of Mexican music that is very popular in both Mexico and North America. Likened to the sound of traditional “Polka”, Norteño is characterized by it’s “oom-pa” rhythms and incorporation of both the accordion and bajo sexto (12 string guitar). This style of traditional mexican music originated in Northern Mexico, and has grown in popularity to reach from Canada, to Columbia, and even Spain. Duranguese is also similar to Norteño music, but adds more focus on brass instruments and speeds things up a bit. Perfect for a Cinco de Mayo fiesta!

Want to add even more depth to your Cinco de Mayo business theme? Give your patrons a bit of a history lesson on why May 5th is such an important day in Mexican history. Cinco de Mayo is the celebration of Mexico’s victory over the French at the “Battle of Puebla” in 1862. Under the leadership of General Ignacio Zaragoza, the under-equipped and outnumbered Mexican army decisively defeated 6,000 French soldiers at forts Loreto and Guadalupe. It’s always awesome when the underdog comes out on top, so join us on The Seasonal Holiday Channel (709) and dance for Mexico!