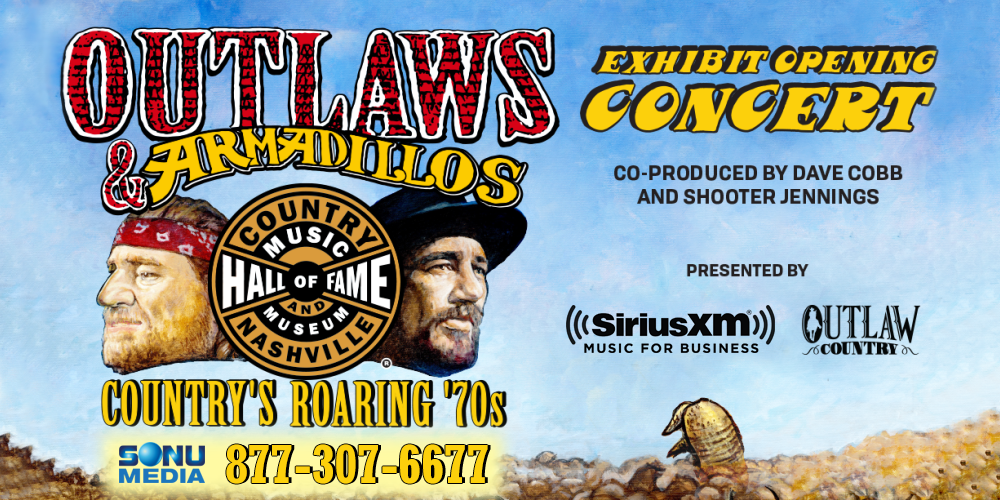 SiriusXM Music for Business has a special treat for all of their Country Music fans this Summer. The Country Music Hall of Fame has opened a brand new exhibit, featuring the Outlaw Country movement of the 1970’s. The unveiling was marked with a star-studded live concert at the CMA Theater in Nashville, TN, and Sirius XM Music for Business account holders will be able to tune-in for the broadcast premiere of Outlaws and Armadillos!

Fans of Outlaw Country music remember the 1970’s as the beginning of something electric. When some of their most admired musicians decided the ideals and restraints of the studio system just weren’t for them, and took the Country genre into an entirely new stratosphere. At the core of this movement were two great country music cities. Both Austin, Texas and Nashville, Tennessee.

Austin, Texas was home to two very important things for the Outlaw Country sub-genre; Willie Nelson and the “Armadillo World Headquarters.” When Willie Nelson secured his own recording rights, he finally acquired the freedom to create as he pleased. Nelson pushed the influences of Honky Tonk and Rockabilly within his mastery of the Folk-Country style, opening one-half of a double door for the Outlaw Country movement. Luckily, Eddie Wilson had also taken a strong interest in turning an old National Guard Armory building into the legendary “Armadillo World Headquarters.” A music venue that went on to spur decades of new genres, major concerts, and music festivals in Austin.

Just a few states away in Nashville, Tennessee, Waylon Jennings was making the push to open the other side of the Outlaw Country door. Like Willie Nelson, Waylon Jennings secured his own recording rights. With the freedom to work with any producer and studio musician he preferred, he decided the Honky Tonk and Rockabilly sounds were exactly how he wanted to stick it to Nashville’s rhinestone Country culture.

The Outlaw Country phenomenon finally dug in its spurs upon the release of “Wanted! The Outlaws”, the first Country Music album to reach platinum-certified sales in 1976. The compilation featured Waylon Jennings, Willie Nelson, Jessi Colter, and Tompall Glaser. The name of the album eventually went on to officially coin the name of the sub-genre, and place the permanent stamp of Outlaw Country on music history.

Tune in to SiriusXM “Outlaw Country” (CH 60) during the times listed below, and enjoy this epic tribute with your customers and staff: