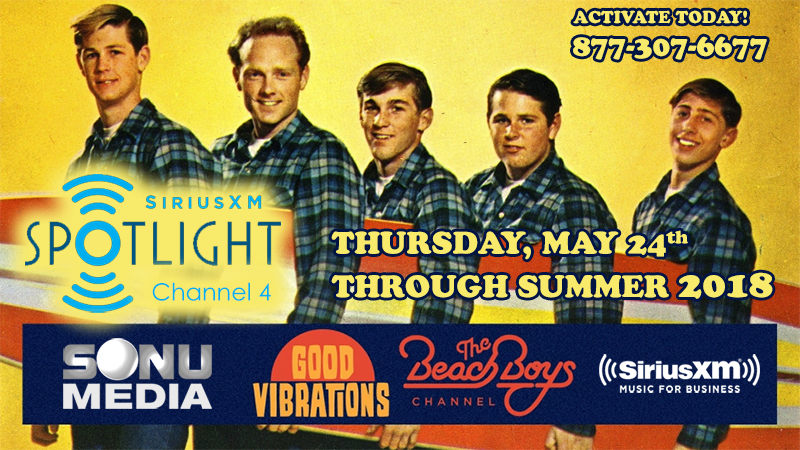 The Beach Boys are coming to SiriusXM Music for Business! The iconic American rock band will be taking over the Spotlight Channel (CH 4) and playing the soundtrack to your Summer 2018 business season. Tune in starting Thursday, May 24th at 12pm EST to fill your guests, customers, and staff with all of the Good Vibrations.

The Beach Boys takeover will include much more than just their most popular hits. Music for Business account holders can also expect rare selections from the band’s live recordings, rehearsal takes, studio conversations, and tons of commentary from famous musicians and celebrities about their impact on America. The Beach Boys and friends will also be taking part in this fantastic Summer-long broadcast event. Brian Wilson, Al Jardine, Mike Love, Bruce Johnston, David Marks, and John Stamos will be live in the studio sharing stories and memories of their experiences as members of The Beach Boys, and of founding members Carl and Dennis Wilson.

2018 is the 30th anniversary of The Beach Boys’ official induction into the Rock and Roll Hall of Fame, and the band is celebrating by releasing The Beach Boys with The Royal Philharmonic Orchestra (Capitol/UMe). The album merges the original vocal tracks of The Beach Boys with newly recorded symphonic arrangements at Abbey Road Studios. Truly a special sonic tribute to an already iconic harmonic sound.

SiriusXM Music for Business subscribers can also get in on the “Fun Fun Fun” by calling in their own requests! Listeners can call in at 833-FUNFUNFUN to cast their vote for their favorite Beach Boys songs, and participate in building this special Summer soundtrack for 2018. Al Jardine, The Beach Boy’s rhythm guitarist, vocalist and co-founder spoke to SiriusXM about the broadcast, “We’ve always said the magic musical serum is joy, and we all need more joy in our lives. SiriusXM helps us bring that joy to all of our fans – past, present, and future.”