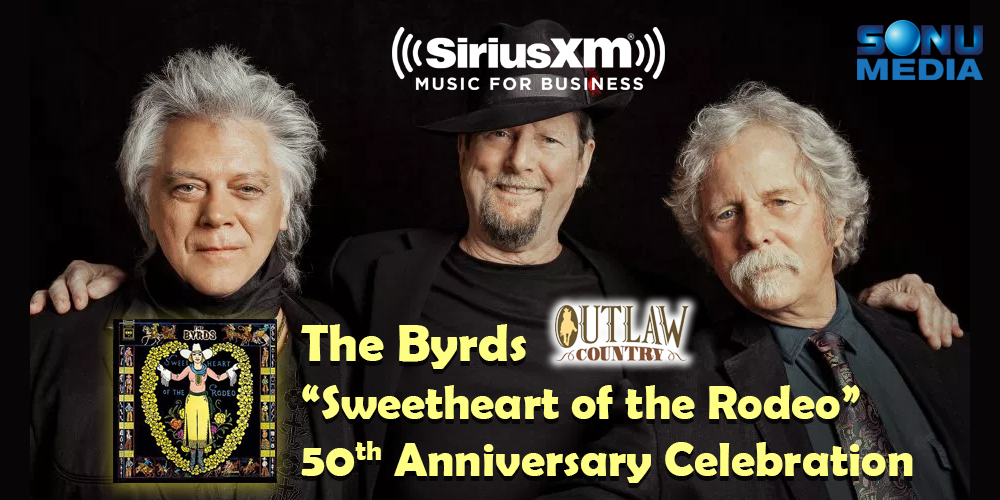 Sweetheart of the Radio, the 1968 blockbuster Country-Rock album by The Byrds, is celebrating the 50th Anniversary of its release on SiriusXM’s “Outlaw Country” (CH 60). The album is widely considered to be one of the most influential Country-Rock albums in history, and being created by one of the most influential bands of the 1960’s certainly helps! The Byrds co-founders, Roger McGuinn and Chris Hillman, have combined powers with Marty Stuart & His Fabulous Superlatives to celebrate with a national tour. SiriusXM Music for Business account holders will also be getting a special broadcast treat to kick things off right.

SiriusXM Outlaw Country will be hosting a must-hear one hour special, hosted by Roger McGuinn, Chris Hillman, and Marty Stuart. This historic and exclusive Byrds broadcast will be airing live from Nashville, Tennessee on Friday, July 13th at 8:00pm EST. This special SiriusXM celebration of Sweetheart of the Rodeo will include live commentary on The Byrds creating the album, their addition of Gram Parsons to the band, and special reflections on The Byrds performing Sweetheart of the Radio live at The Grand Ole Opry in 1968. All to the accompaniment of tracks from the album, and the original music that inspired The Byrds to create Sweetheart of the Radio.

Can’t tune-in on Friday for the live broadcast event? Don’t worry! Rebroadcasts will also be airing on Outlaw Country all weekend. Tune-in Saturday, July 14th and Sunday, July 15th at the times listed below to catch everything you may have missed. Join SiriusXM Music for Business with your staff and patrons to enjoy this landmark of country music history.