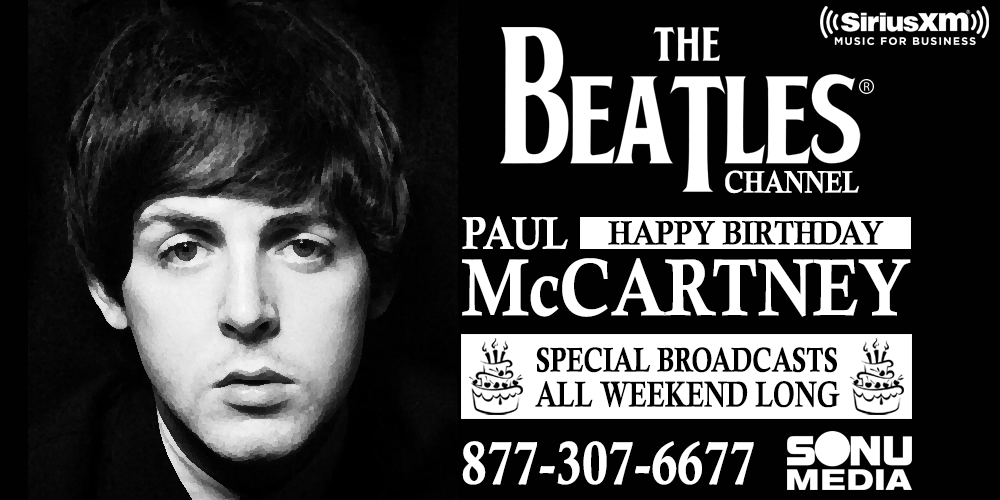 SiriusXM Music for Business accounts can join the birthday celebration of Paul McCartney, June 18th, all weekend long on The Beatles Channel (CH 18)! There are tons of special playlists, concert broadcasts, and exclusive interviews to enjoy with your staff and guests.

“Eight Songs a Week”, the special Beatles playlist handpicked weekly by the fans themselves, will be airing a very special tribute to Paul McCartney on Friday (6/15) at 4pm ET. Tune in to hear how the listeners feel which songs best accentuate the life of one of the most successful musicians of all time.

“Magical McCartney Maxi Concert” is an epic broadcast devised by the curators of SiriusXM’s The Beatles Channel. This Paul McCartney fan’s dream playlist is a full hour of live hits and solos. It is an audio event you do not want to miss!

“Paul McCartney LIVE at The Apollo” is a SiriusXM Exclusive broadcast event. Hear the wonder of Paul McCartney’s first performance at the fabled Apollo Theater in Harlem, New York City in 2010. This epic concert was played for SiriusXM subscribers, and we are extremely happy to bring it back in celebration of his birthday.

“Fab Fourum” is the beloved weekly talk show hosted by Dennis Elsas and Bill Flanagan on SiriusXM’s The Beatles Channel, and it is appropriately dedicated to Paul McCartney this week! The show has special guests Robbie McIntosh (former McCartney Band Mate) and Dennis DeYoung (Styx Lead Singer) discussing all things McCartney and even taking live calls from fans.

“Breakfast with The Beatles” is the weekly sit down with acclaimed musician and Beatles afficionado, Chris Carter. Chris is devoting 3 whole hours of his show to music by Paul McCartney in celebration of Macca’s day of birth. Join him on your Monday morning, and pep up for your work day!

“Dark Horse Radio” will be airing a special celebration of the friendship between Paul McCartney and George Harrison this week. Join host Laura Cantrell as she delves into one of the most talked about musical relationships in history.

“Peter Asher From Me to You: A-Z” is Peter Asher’s tribute to the Letter P, and naturally features songs with Paul McCartney! Catch this alphabetical tribute starting Thursday, June 14th.