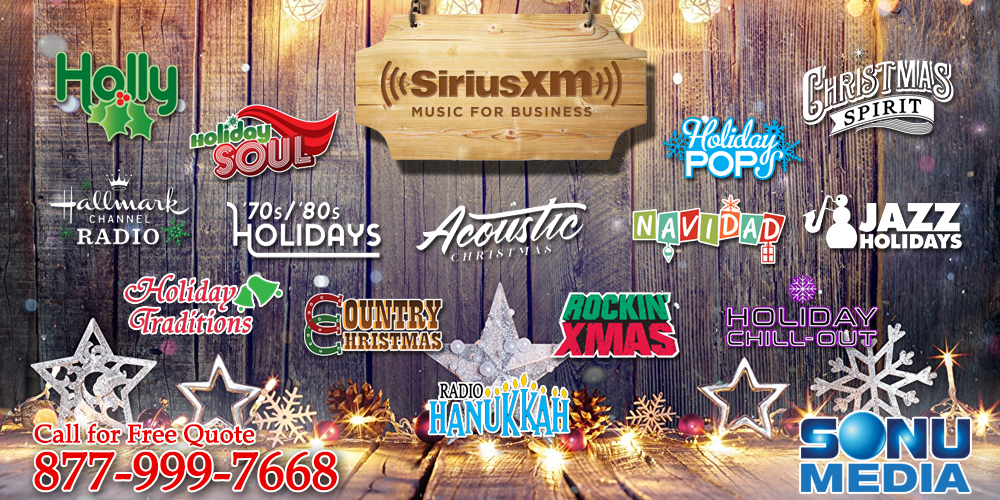 SiriusXM Holiday Channels are back on the Music for Business lineup, and Sonu Media has a full schedule just for you! Deck the Halls, Pour the Coquito, and Light the Candles to 14 professionally curated holiday playlists, including both Christmas and Hunnukah themed songs. Most of the familiar SiriusXM Holiday Channels have returned to encourage a most festive season, and a few newcomers have joined the fun with some more contemporary flare. “Rockin’ Xmas”, “70s/80s Holiday”, and “Holiday Chill-Out” are all set to bring a bit of new flavor to the most wonderful time of the year, “Navidad” brings you the best in Spanish Christmas music all season long!

SiriusXM Holiday Music is an incredibly cost effective way to bring your staff and customers together in the spirit of the season. All 14 SiriusXM Holiday Channels are included annually at no additional cost, allowing your business to rest easy and play appropriate licensed music from November 1st through New Year’s Day. Retail Outlets, Produce Markets, Physician’s Offices, Office Buildings, Hotels, Hospitals, Assisted Living Communities, and many more categories of business benefit greatly from SiriusXM’s library of seasonal music every year. Upgrade the spirit at your property by calling Sonu Media to have SiriusXM Holiday Channels activated for 2019 today.

Don’t miss traditional holiday recordings from the ‘40s through the ‘60s by artists such as Bing Crosby, Andy Williams, Ray Conniff and Nat King Cole.
Friday, November 1 – Thursday, December 26 at 3am ET on channel 73

Hallmark Channel’s “Countdown to Christmas” celebrates its 10th Anniversary as one of your family’s traditions for the holidays. Tune in to Hallmark Channel Radio to hear the songs you love, brought to you by your favorite Hallmark Channel stars, like Candace Cameron Bure, who will share their own favorite carols, traditions and take you behind the scenes of their new movies.
Friday, October 25 – Thursday, December 28 at 3am ET on channel 70

Enjoy an extensive collection of Hanukkah-themed music, including contemporary, traditional and children’s selections, as well as daily reflections and prayers related to the holiday.
Friday, December 20 – Tuesday, December 31 at 3am ET on channel 788

Sing along to the biggest and most familiar Christmas and holiday songs from the ’70s & ’80s.
Friday, November 1 – Thursday, December 26 at 3am ET on channel 783

Rock out to classic Christmas hits, rarities, live tracks and songs that might make you laugh.
Friday, November 1 – Thursday, December 26 at 3am ET on channel 784

Fire up the chestnuts and be prepared to bop to Christmas favorites from classic legends and contemporary jazz stars, such as Ella Fitzgerald, Kenny G, Count Basie Orchestra, Diana Krall, Wynton Marsalis and Vince Guaraldi.
Friday, November 1 – Thursday, December 26 at 3am ET on channel 786