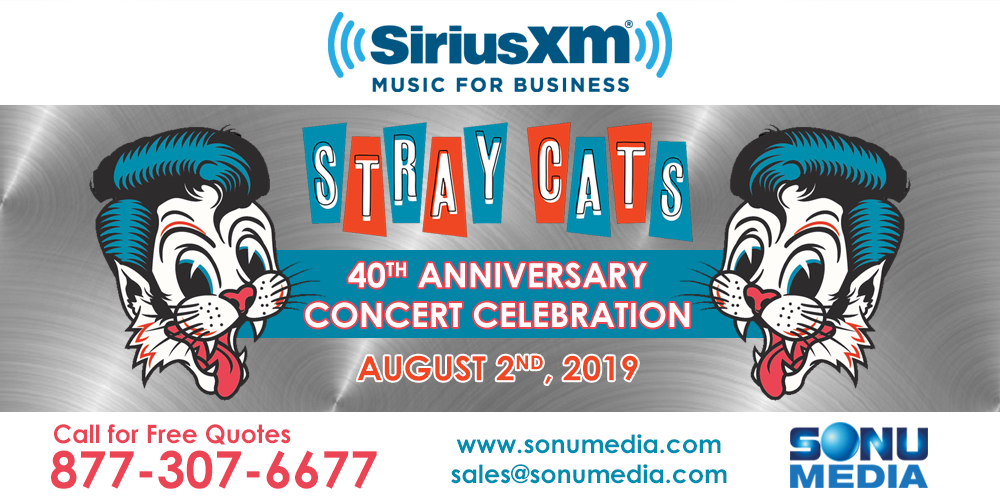 SiriusXM Music for Business account holders will receive a special performance broadcast from the iconic Amercian Rock & Roll Band, The Stray Cats, on Friday, August 2nd. The original trifecta comprised of Brian Setzer, Lee Rocker, and Slim Jim Phantom will be playing a live, invitation-only concert within their home town of Massapequa, NY. This event will be the official launch of The Stray Cats 40th Anniversary U.S. Tour. This special live performance will only be attended by SiriusXM account holders, and broadcasted via SiriusXM channels.

The Stray Cats began their historical career 40 Years ago at the Revolution Bar & Grill in 1979, where they auditioned to play the venue and were turned down! Now all three original members will bring their story full-circle by finally playing the first gig they ever lost. The band will be playing fan favorites from across all 40 years of their releases, including new material from their new album “40”. “40” is the first studio album The Stray Cats have released in 26 years, and is a project with Surfdog Records (Distribution by BMG).

Tune in at your place of business to one of three SiriusXM channels airing the special Stray Cats concert. Outlaw country (CH 60), Little Steven’s Underground Garage (CH 21), and 1st Wave (CH 33) will be ready to rock with you no matter where you are in the country. Join in The Stray Cats 40th Anniversary celebration with your patrons and staff!